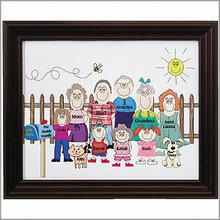 There is something about the holiday season that has folks thinking about family.... past .. present ... and future (i guess).... Two of the blogs i read have recently been letters to parents long gone.... both letters brought tears to my eyes... they were beautifully written.. and showed the love and respect both men had for their family members....

Christmas, for me, tends to bring back memories of family ... when i hang the ornament on the tree... when i reach for a special serving platter..... or make a family recipe......... i remember all the generations that have come before me..

i was lucky that way......... the generations who came before me were as much a part of each family celebration as if they were there..i would like to share a few of them with you.. they are all a part of me.. helped to make me what i am today...........

first grandma - well i have talked about before her in this blog.. she was orphaned very young and was raised by an Aunt who owned a bakery shop.. grandma was a GREAT cook though she couldn't make just one of anything.. and my memories of her revolve around her kitchen and all the breads and sticky buns and pies that were always cooling there.. she taught me to cook.

Then there were Uncle Vic and Aunty Syl ...but especially Aunty Syl.. she was my hero....... fought breast cancer most of my growing up years.. the doctors never actually helped her win that battle.. but her spirit did.. she taught me to live every day as if it was the only one.. a gift.. that is how she lived her life.. one day at a time.. and god love her she kept the cancer at bay till some time in her late 80's when she died quietly in her sleep.

and of course there were the multitudes of cousins .... two of whom helped shaped my life in ways they will never know.. one taught me .. gave me the desire the need to seek out that one child who needed special attention.. the one child who didn't laugh or shout or run and play like other children... and the other cousin taught me the meaning of quiet strength... both very different men.. one i loved ...the other i despised .. yet i learned an important lesson from both !

There were my parents........... Dad - who was strong and loving and strict and very Victorian.. i know i gave him more than one headache.. especially when i declared i was going to be a teacher... His response.. "those who can do.. those who can't teach!" He lived to see my daughters.. was ...i know... proud of my being a "stay at home mom" but he didn't live to see me become the "teacher" of special needs kids... some days i wonder what He thinks of that...........i can still see this giant of a man lying under the Christmas tree with my eldest born telling her stories about the Christmas fairies that danced among the branches..... i never got to say goodbye to Him.. he did everything fast.. and he didn't wait for me.. some time later in late spring i sat by his grave and told him that.. i wanted a chance to say goodbye !!!

Mom.. was very special.... she wore hats and gloves all the time.. i don't think i ever really saw her dressed in pants .. except maybe much later in life.......... always in dresses nylons and high heels.. and she had a very small head and she used to stuff her hats with tissue paper to make them fit just right.. a L A D Y.... and i remember a time a long time ago that she was out to lunch with some other L A D I E S.. and they were walking down a main street .. and the wind caught her hat and blew it off her head .. and tissue paper went one way and the hat the other..... i remember a time she tried to rescue a bird in the middle of the highway.. we were stopped at the side of the road for a bit... while Dad took pictures of some water fall or other.. and Mom - god love her - ran out into the middle of that highway.. waving white kleenixes to stop traffic to rescue said bird !!! The bird took one look at this "mad woman" waving kleenixes and shouting stop .. and promptly flew away! oh god how we all laughed at Mom's exploits .. they were so numerous... but always underneath it all.. she was a L A D Y .. and everyone could see it.. i got to say goodbye to her.. it took 3 long angonizing months .. sitting by her side.. but i got to say goodbye...

And then there was Aunty Olive... as my ex hubbie said once .. "every family needs an Aunty Olive - to keep them honest"... She was a lesbian........ though not once was that word ever used by her or anyone else..... she lived with the same woman for some 30 years before Miss B's death.......... and then it was just Olive.. and us........ Olive was my mother's sister and as opposite as they come.. where my mom was small - even petite - Olive was big.. big boned and tall !!! Where my mom dressed as a L A D Y every day of her life.. Olive dressed as the spirit moved her... usually in plaid pants and shirts... she never had children but she had dogs instead.. sometimes as many as 4 boxers .......... her favourite expression was "farting assed .............. (fill in the blank) " farting assed weather.. farting ass state of affairs.. no one but no one could sand down her rough edges.. Her home was filled with mementos from everywhere .. she defined eclectic style in everything !!! And it was with Olive that i formed a bond.. a mother daughter type of bond......... and i promised her .. as she grew old and sick and tired.. that no one would use heroic measures to keep her alive.. oh i remember that promise.. so easily made... never expecting i would have to keep it..... some of us thought she would go on forever.. and finally go out with a bang........... but she didn't .. she had a stroke.. and lingered.. and i became the poster child for her right to die with dignity ! god i remember that day.. i fought the hospital nurses and doctors and administrators.. i fought the hospital chaplin who spewed words of comfort ??? and encouragement.. and i called my Sir.. and drew on His strength to fight them all.. and finally i sat beside her bedside holding on to her thumb for dear life.. (as her thumb was the only part of that old body that worked) and i whispered in her ear that i was TRYING... and that thumb squeezed my hand.. and i cried..

all of these wonderful people helped shaped the person i am today... a bit eclectic .. a bit of a lady.. a fighter for kids who need to laugh and run and shout.. someone who tries very hard to live each day as if it were a gift .. and with silent strength............ family heritage is a wonderful gift. !!!