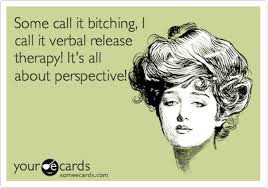 Soooooooo you all ready for some 'verbal release therapy'???

When the lil one came back to us last week - she had a new expression.... 'I'm skin and bones' ........ it made my blood boil!!  For those of you new to this discussion - 2 years ago the lil one was 25 pounds overweight and as there is diabetes on BOTH sides of her family it was a bit worrisome.  Her doctor has been seeing her every 2-3 months and closely following her weight loss.  We (Sir Steve and I) worked really hard at teaching her about making healthy choices....... putting her fork down when she was full (which meant teaching what 'full' felt like) .... and increasing her activity levels.  It has taken 2 years (mainly cause 'mother' couldn't/wouldn't get on board) but she is now down to within 4 pounds of where she should be.

We never once talked about losing weight!  Or used the word fat !! OR any reference to body image.  We talked about healthy choices and getting healthy.

BUT as always - mother and her family are sabotaging our work.  It really makes my blood boil ya know?!  It's just another example of her lack of interest/caring in her child.  SO ........ I sent mother a curt note when we got home........ telling her to shut the f**k up about skin and bones....... She didn't even answer me....... surprise surprise! AND yeah I am past being diplomatic with her......... wayyyyyy past

It was gonna be so easy on me this year - remember?? They are live streaming her class and she will sit in her bedroom and be in the class with her friends.  YAY!

We tried to log her laptop in yesterday and the program won't accept the password her teacher gave us.  GAH!!  Sent the teacher a message and now we hurry up and wait.

Right!! this year is gonna be soooooooo much easier on me........ I do LOVE fairy tales.

The other night I had a bad dream - the front door was kicked in by a whack of policemen who announced they were the education police - the mother had filed a complaint against me and they had come to remove the child from my care!