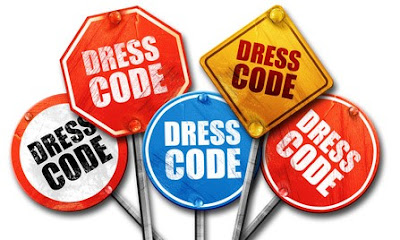 Way back when I was living in Montreal and first entering the BDSM world... you know way back when everything was shiny and bright and you wanted / HAD TO try everything NOW! I had a Dominant who looked around at what everyone else was doing and decided we would do it ALL (whether it fit or not)
And trust me when I say - there was some real weird sh*t happening in the Montreal community back then.  An example - there was a group that insisted that all submissives kneel and kiss the hand of EVERY dominant there.  I never understood that one... and was labelled the rebellious sub cause that was one of the things I refused to do!

We had a dress code 24/7 -
1) I was to be naked at all times at home.
(which was REALLY dumb cause all my windows were floor to ceiling - and offered no privacy really - so I had to keep the curtains drawn - which was depressing cause it was so damn dark all the time)
also let's be honest - sitting on furniture when you're naked is not that hygienic - so I always had a towel folded to sit on.  (UGH!  I blush at the memory) Answering the front door offered a whole set of new challenges.

2) my dominant preferred me in dresses - like ALL the time.... which meant I had to buy a new wardrobe...... and dresses didn't actually work well in the classroom.

3)  when I went out I was not allowed to wear any underwear!  even to work.

The reasoning was - I had to be accessible at all times. IF I tried to discuss this dress code  - explain why it made me uncomfortable I was told I was a bad 'subbie'.  I didn't want to be 'bad' ....... so I stressed.

The other thing I remember about this 'dress code' was how humiliated it made me feel.  My dominant would take great pleasure in telling anyone who would listen how I was naked..... accessible.... I was (am) a private person - every time I would hear him talking about my nudity I would die a little bit inside.

By the time I left that relationship I struggled with 'dress code'.  Poor Sir Steve had to constantly reassure me that I was to wear what made ME happy - what  made ME feel good.  He did not understand the need to control me to that extent - especially when it made me so obviously uncomfortable.  He did have 1 simple dress code rule - I would sleep naked.... easy peasy!  slipping into bed - snuggling up against his naked body is perhaps the best feeling in the world. Over the last 4 years I have learned one thing that Sir Steve likes/enjoys... and that's when I don't wear a bra.  He likes to be able to touch - OH forget touch!  He likes to grab and ya know what?? I like when he grabs... (but he never frowns when I put a bra on... not if it makes me comfortable!)