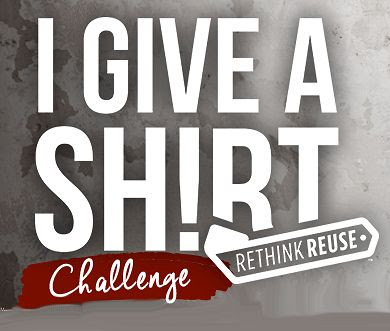 We recycle - I'm pretty sure everyone does these days... cause ya know if you don't you are a target for the recycling nazis.  We're not rabid recyclers...but we do our bit.  Every spring and fall - I go through the lil one's clothes and mine.... sorting out what doesn't fit .. what isn't going to be worn .... and bag them.  In the past we would drag these bags to second hand thrift shops - but GAH!!  it took forever to schedule a drop off - even before the pandemic!  And the bags would sit for weeks at the back door.  Occasionally we would have a family we could pass along the lil one's clothes to... cause ya know kids out grow their clothes seasonally.  BUT it was a hazzle.. and I was tempted - more often than not - to just toss them in the garbage.  (yeah yeah I know - BAD BAD BAD!!)

Then in 2019 we got notification that our city was doing a "I Give a Shirt" campaign.  The principal was simple......... fill up a garbage bag with gently used clothing, label it and on the scheduled day put it out with your garbage.  The city would come around and collect all the bags and take them to charities / second hand stores for distribution.  In return we got a sticker "I give a shirt" to put on our recycling bin.

WOW!  great idea and so much easier for us.  We put our first bag out in 2019.  Last year - despite the pandemic - our city ran the campaign again..... and we put another bag out.  Yesterday they announced this year's campaign.  Apparently last year they collected 27,000 pounds - yes 27,000 pounds! - of clothing. Next week is the collection date.......... and because of the huge participation they are going to run another pick up in October.   It boggles the mind ya know?!

I started cleaning out cupboards this morning....... this bag is just MY clothing - stuff that is dated or I just never really liked. 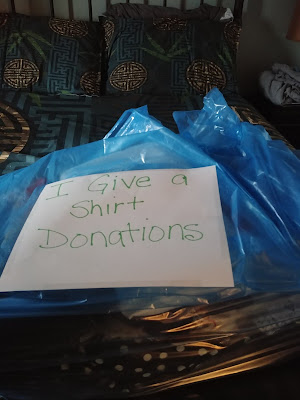 Last night when we were snuggled in bed - Sir Steve asked what my plans were for today - I told him sorting out my clothes, the lil one's clothes ... and mumbled "and your clothes".  He said to do mine and the lil one's but leave his alone.  le sigh.  I'm hoping I can get him to at least take a look at the cupboard full of his clothes and go through his drawers of clothes and maybe part with some??!!  He isn't even that interested in replacing the old clothes with new clothes.  Is that a man thing?? cause I mean seriously - who doesn't want to buy new clothes?? In my experience - M.E.N.

Life is good when I can sort and donate and have tidier cupboards!