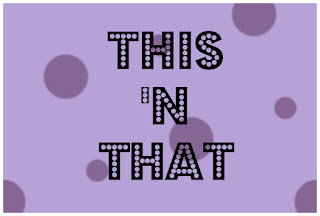 Lots of little bits of news around here today - in no particular order..........

Had an appointment with the denturist again yesterday - it went much better.  First off.. I had a plan to handle his lateness....... I waited 10 minutes then asked the receptionist if he was gonna be much longer 'cause if he was - I would go and do my shopping...... Amazingly he was suddenly available and took me immediately!! He religned my plate and lo and behold - I'm not gagging nearly as much..... I can eat much easier and even bite into my toast!!  YAY!!  He told me no foods are off limits - if I can chew/eat it I can have it!!  Was out of his office in just under an hour and managed to run some messages before heading home

A week or so ago I joined a Christmas group on FB.  Now my feed is filled with Christmas recipes and decorating and DIY crafts!!  and I am in Christmas heaven!!  I may have suggested to Sir Steve that we start putting stuff up this weekend....... didn't get much of a response so I suggested we put the outside decorations up seeing as the weather is supposed to be spring like!!  Sir Steve agreed!!!

(LOL am sitting here watching my morning news show while I write this..... and the weather girl just announced she's putting her tree up this weekend - 'we need joy' she said...... so I am not alone in my desire to have twinkly Christmas lights up and feel the joy of the season )

I have finished ALL my Christmas shopping - which isn't really that out of character for me.... I have been shopping early since I was pregnant with my first 'baby' - over 40 years ago!

AND I have planned my menus for Dec 24 - planned my baking - made lists of ingredients.   Reason being it costs less to spread it out over weeks of shopping cause I may just get some of the stuff on sale ya know??

Remembrance Day - folks are kinda rabid about NOT decorating till after Nov 11th.  It's something I have struggled over.......... just 'cause I decorate for Christmas does NOT mean I don't hold our veterans close to my heart... on the 11th - BUT also all year long.  Again my dislike of designating one day to honour anyone!!  Also - didn't those soldiers fight for our right to live free - to make decisions that benefit us?? Would they not understand our need for some joy ??? I think they would.

AND for the record - on the 11th I  have every intention of going outside - standing on our front steps.........bowing my head and having the 2 minutes of silence - surrounded by our Christmas greenery and lights!

On the home schooling front..... just like when I was teaching - I set some goals for the lil one.  The main one being - getting her to speak up and say "I don't understand' OR speak up and say 'when you do that it hurts my feelings"

This past week twice I have heard her tell her teacher "I don't understand!"  YAY!  AND the little girl she has play dates with - tends to write "ha ha" a lot in response to something the lil one said.  This has been upsetting the lil one (personally I think she assumes the other girl is laughing AT her.)  So the other night we worked on what she could say when she sees the 'haha' ... AND she did it this morning.... YAY!  turns out - the other lil girl explained -  it means she is laughing over something our lil one said - or that she is giggling......... the lil one came to tell me and said she felt soooooo much better!!

AND last week - the lil one made some 'spider' cookies for Halloween all by herself.  I supervised - especially the melting of chocolate in the microwave.... but she read the recipe by herself....... measured the ingredients by herself........ and assembled the cookies herself!! 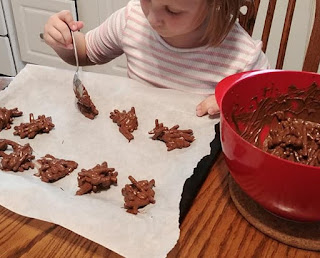 Next week we're gonna try another recipe - this time for Tiger bars.

And that's the news from this corner of Blogland