clothes pins and ropes and whips oh my!!!

"I have an idea" and with little more fanfare than that... Sir disappeared down the stairs to return with a pile of ropes. A chair was moved to the middle of the living room.. i was stripped and sat gingerly on the chair.. shivering as the cold wooden back embraced my body.

The blue ropes were slipped around my chest.. around the back of the chair... back around my breasts... pulled tight making them bulge and perk .. especially the nipples - perky nipples! Ropes sliding around my neck pulled tight holding me straight and upright and firm in the seat. Then Sir bound my wrists tight to the back legs of the chair.... and then wrapping ropes around my ankles pulling my legs apart forcing them to rest on the outside of each chair leg.. He bound them tight - leaving me open and exposed. 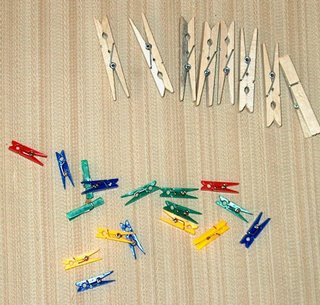 Sir ignored my pathetic pleas for clemency...... He tried to clip the brightly coloured small plastic pegs to my breasts......... oh joy oh joy!! no sooner would He clip one on than i would feel the peg slipping and popping .. and off it would spring .. some landing across the room. This did NOT deter my Sir from His mission!! He was going to have clothes pegs on my breasts come hell or high water .. more plastic pegs were fastened .. and they too popped off !!! Sir stood back and muttering under His breath moved downwards... discovering to His joy (and my misery) that these colourful pegs clipped quite nicely to the insides of my thighs. Pinch clip pinch clip .. misery misery!!!
Then Sir slipped the blindfold over my eyes........ and i just about melted right there on the chair... the loss of sight has always played a major role in my slipping away to the land of fairies.........
Now i felt Sir's hands tugging and pulling the skin on my breasts.. more muttering then the firm clamp of a peg to skin.. and a yelp from me. More pinches more clamping more pegs and a whole lot more yelps..

Then just so i didn't grow too bored Sir decided another little session of target practice was needed. So the whip was used to hit the perky nipples, the pegs on the breasts, and the pegs on the pussy lips.

When Sir was completely finished amusing Himself (ok ok .. i was thoroughly "amused" as well.. i admit it!) He ordered me to remove the clothes pegs......... Now folks.. if you know anything about clothes pegs you know the removal is most definitely worse than the application.......... i was quite pleased that Sir allowed me to do it.. as i had had visions of Him flicking them off with the whip........... my hands flew to the ones on my pussy first.. i tried very hard to ease it off.... but the pain shot through my body straight to the top of my head and was proof positive that there was no easing off that was going to work........... as quickly as i could i removed the others... and then tried to release the ones that were on my inner thighs.......... honest to god folks those suckers were STUCK to my skin...... stuck.. like glue......... i had to literally yank them off.. i kept rubbing the skin to make sure i hadn't pulled off chunks in the process.......

and for those inquiring minds.. i am thinking (if blogspot cooperates ) i will post some pictures on the photojournal (see link on right) of the event..............