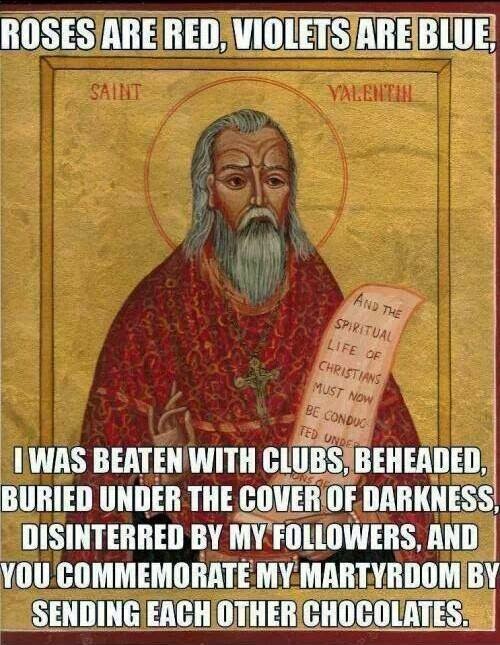 the above was posted on Facebook by an Armenian friend.  Honestly I don't know anything about the "real" St Valentine - but this works for the blog I have in mind about Sadists and Valentine's Day................ (follow the bouncing ball here)

W and I had a Valentine's munch on Saturday evening with a play party immediately following said dinner.  I decided to please W and wear a dress - a red one in honour of the occasion.  Under the dress I had black thongs - black bra and black stockings and black knee high boots.

I had completely and totally forgotten why I do NOT wear dresses in the winter!!

In the time it took me to walk to the car I was frozen !!  The arctic winds were blowing up my dress and giving me a good case of - shall we say - " chapped lips"

Dinner was nice - the conversation stimulating............. and then we all headed off to a near by home for the play party.  W had loaded all - and I do mean ALL - the toys for the great Valentine beat down. (or is that beat up??) Not long after arriving at the party W and I headed downstairs - we had been forewarned that there was gonna be a big crowd and if we wanted any quality play time we should get to it pretty damn quick.

I  was soon down to my thongs and bra and stockings on the cross - gritting my teeth - trying to find that happy place in my head - but instead only hearing the little voices saying "you agreed to WHAT??!"  (I wonder some times if we played with any regularity - more than once a month - would the beginnings of a public play be easier to absorb)

But my Sadist (said lovingly and with great respect) cycled through the 'easy' toys first - the two tongued leather tawse - the canes (2 different ones I think) the circus whip - the dog whip - and then he reached for the NEW whip!  the one that raised welts through my JEANS the first time he tried it.  I literally held my breath!  And it hurt - and I finally had to cave and beg W to stop - well not stop - but change toys.  There were numerous other implements used - and welts raised (which I still sported on Sunday) and then W's voice - soft in my ear - I had to focus to hear/understand him - "Who loves you?" was the question.  "You do" was the answer.  "How do you know?" was the next question and as always the answer was "because you beat me".

I realized then and there - that's how a Sadist says "Happy Valentine's" with whips and floggers and canes and ouchies......... leaving me drained and lost in the fog of endorphins..........