We've had an amazing 2 weeks with the lil one and home schooling - AND attitude! even the teacher has noticed how animated she has been.  I have my suspicions as to what brought on this change..... first I told her come hell or high water she's going back to school in September... and I told her that there was 3 weeks left of school... shrug... don't know what prompted this change - don't much care to be honest... it's just really good to have OUR lil one back!

Sir Steve and I have been talking about how to acknowledge this positive change - and we decided that perhaps a trip to Dairy Queen after dinner would be fun! 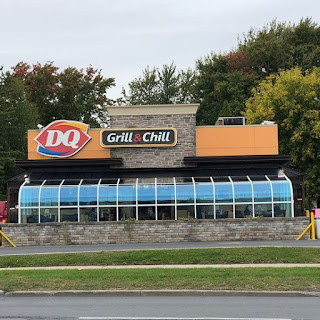 Dairy Queen for those of you who may not know (not sure if it is a brand name known anywhere other than here in Canada/US)  is an ice cream shop.  Last June the lil one received a gift certificate for Dairy Queen as part of a reward for outstanding work from school.

SO last night after dinner Sir Steve asked if she would like to take a trip to Dairy Queen for dessert.  Of course he didn't have to ask twice!  Excitement ruled the day!  (He did make a point of saying we were going cause she had been working hard and not giving anyone attitude)

She proudly brought her gift certificate and with her dad's help decided on a small ice cream cone.  THEN the chap behind the counter asked if she wanted a "DIP" she looked like a deer caught in the headlights!  and said "no".  I was shocked..... no chocolate dip??  I thought all kids loved chocolate dip!  Then he listed the flavours of dip - chocolate ... blah blah... blah blah.... candy cotton!  I stopped him there - cause ya know it's candy cotton!!  The lil one still looked overwhelmed.  I suggested she take a candy cotton dipped cone - and promised her she wouldn't be disappointed.  While her cone was being made she presented her gift certificate - AND surprise surprise!  it came back with enough money still on it for another cone!!  Excitement reigned! 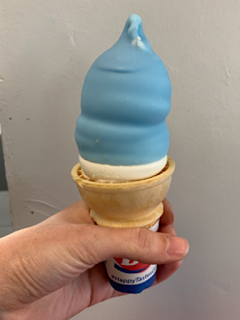 Personally I'm not sure I would be tempted by a BLUE ice cream cone - but hey I'm not 8 anymore!

We sat outside by ourselves and enjoyed our ice cream - and announced it really truly was summer now!