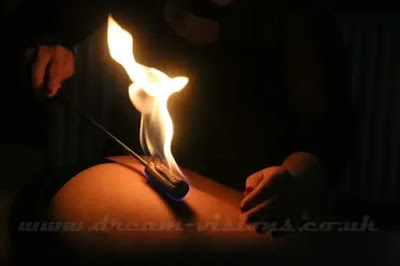 Yesterday I commented on Prefectdt's blog - he had a couple of videos and one involved fire play.  He replied to me saying he didn't know fire play was a 'thing' - thought it was only used for stage shows.

Fire Play is considered 'edge play' - along with knife play - electric play - breath play - blood play.  Not as many people indulge in these activities as they do in whips and floggers and paddles..... for obvious reasons.

I loved watching it - it reminded me of a dance - a graceful albeit dangerous dance between the two partners.  It requires a lot of practice and knowledge and trust - with a capital T.

I attended a play party in our Nation's capital a few years ago.  There was a married couple who indulged in a lot of edge play... and this evening they were going to do a fire play scene.  I had seen them do it before many times... it was beautiful to watch.  There was no wiggling - or crying - or struggle.  I made sure I had a front row seat (so to speak) when they started. She was lying naked on her back.  He lined up the tools of the trade... including a BIG blanket and water.

It started off slowly - with him creating fire that travelled up her body - from her legs to her breasts.  As the fire spread upwards - his hand would follow closely behind putting it out.  At first it was slow and methodical... and then it started to speed up ... the lights were down so everyone could appreciate the pretty flames licking at her body... the music was low so we could hear her moans of pleasure......

we watched as his hand travelled up to her belly putting the flames out - or so he thought - except something went wrong and the flames came back over her lower belly - his hand and eyes were on her breasts - it took a few seconds before she screamed...... loud blood curdling screams.  His head turned and he saw the flames burning her belly and pink girly bits.  He grabbed the towel and threw it over her body - laying his body over top of the towel smothering the flames.  When he was sure it was out - he picked her up and carried her to a couch - medical aid was performed.  She was ok.

Removed video because I felt uncomfortable with it