A question...how would you differentiate between the 'newbies/wannabes' and serious practitioners, other than having no manners and/or behaving badly? I've looked at the Fetlife people in my area and wonder how some, so young... early 20's, can profess to be experienced Dom/Dommes? From what out on these blogs, it seems beginning BDSMers should have mentors or teachers to guide them as they gain experience. Hope I'm not stepping on toes... just curious. 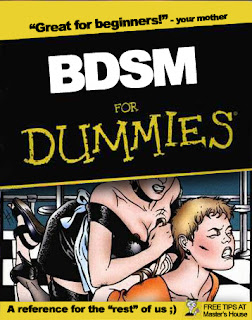 I thought the question above was valid and thought provoking......after all... if one is going to identify the problems and bitch about them - one should offer some plausible solutions as well.  I am firm believer in the old adage if you are not part of the solution you are part of the problem.

We have all been a newbie (maybe not a wannabe - which I tend to identify completely different) And as a newbie we are anxious to experience everything and anything immediately.

Do newbies need mentors/teachers?? It would be nice yes........ BUT  the truth of the matter is how does one find a skilled practitioner to teach and mentor.  'cause ya know anyone ..... ANYONE ....... can say come be with me I will mentor you and they might be a total nutcase - a danger to everything Safe Sane and Consentual.  How can one know? Most of us do not hang out our "shingles"  for one and all to see.  In my experience some of the most experienced - most knowledgeable people are the quiet ones who slip in and out of public view like a ghost.


*Screw the Roses Send me the Thorns
* SM 101 - A Realistic Introduction
* Jay Wiseman - Erotic Bondage Handbook
* Different Loving
* The Loving Dominant
* Flogging by Joseph W Bean
and my favourite cause I knew nothing at all about dominating a male..
* The Family Jewels
And then......... go to munches - vanilla gatherings meet people face to face..... use your instincts... befriend people who appear sane and appear to know what they are talking about... get to know what parties are around - go to a party to watch.... watch I said - NOT play.  Watch the different styles - watch the interaction between spanker and spankee - is it a good show to watch - or do you feel as though you are a peeping tom - watching something very intimate .. something very much about the two participants.....
if you watch from a safe distance - you will be most welcome to watch - remember if they didn't want an audience - they wouldn't be playing in public.  BUT from a distance for god's sakes!!!
but also watch for little things like after care - what happens when the spankee is cut down - is he/she pretty much left to their own devices?? or does the spanker coddle them - sit with them - stroke them make sure they are ok..
Also it is my experience that the true BDSM aficionados do not gather newbies around them like some cult leader.  The real Dominants / submissives tend not to blow their own horn.  BUT they are very willing to answer intelligent questions after the fact.  They are very willing to show you their toys - to explain what each does - and how to use it.  They might even offer to share their email / contact information with you..... before they float out of sight into a puff of smoke.
Now .......... IF I had money to throw away ............ I would open a semi private play room / dungeon if you prefer ........... and I would limit admittance.  I have given some very serious thought to how one would do that - pick the real players from the stand and models............. and then I realized I did just that for W's surprise party in January.  I went through a list of folks we know.. and invited the ones that I know play .........
So If I opened this fantasy club - I would invite the same people.  I would also insist that a newbie be "vetted" by someone I knew.  That a newbie be willing and anxious to participate in the learning process.  That the newbie be given the "rules" of the dungeon and if they did not toe the mark so to speak - they would be asked to leave immediately and would not be allowed to return.
I would want to create a safe play environment for those that do want to play ..... I would have very separate areas for play and socializing - clearly marked.  Everyone would be given a concise list of "house rules" and they would be expected to abide by them.  If they didn't they wouldn't be invited back.
I would have times set aside for pictures - usually before the start of the evening.  Because truthfully everyone at one time or another wants some photos taken - to post on a website - or for their own personal collection.  Cameras would then be stored away safely ........ and only released when the participant was going home.
AND while I am going on about my fantasy club ....... I would have slaves/submissives who wish to participate but are new with no ties - come and serve........ dress to impress and serve under the "House protection" ........ They would offer feet massages - back massages - fetching drinks and filling glasses.  If they wanted to play - to try something new - the "House" would pair them up with someone so they could experience something.
It would be a safe haven - that hopefully would promote friendship, respect, trust, and all that is good about this lifestyle.  Hell we might even have monthly "munches" pot luck dinners where folks could meet and discuss different topics - educating each other as well as the newbies in a non-threatening atmosphere.
Yeah ..... If I had money to throw away ...... I would have some fun !!!
Posted by morningstar 0n February 04, 2012