Remember how I was fussing over what to wear?? I went to W's with 2 outfits in mind... one was my leather corset with black stay up stockings.. OR...... I suggested to W that he might use his new bronze rope and silver rope and make a body harness for me to wear .. with black latex stockings and black latex garter belt. 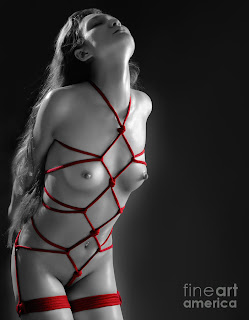 W agreed that a rope body harness would be do-able ... but unlike the picture he did a modified body harness - attaching the bronze rope to the O collar and weaving it around my breasts - bringing it down between my legs and back up the back .. around and tying it off at the breast.   I had a black lacy cover up thingy that I wore over the top... if I had a body like in the picture above I would have gone without... but believe it or not I am shy and the body is nothing like above.

When we got to the party - there were already a goodly number of cars.  There had been 195 rsvps ... I felt anxious.


W decided we would play early - well before the masses doubled or tripled.  We used the ladder-like frame.......... and got started.  I was having a wardrobe malfunction..... my brand new garter belt (gift from eldest daughter) was just a tad too big and for some reason, picked the exact moment W started paddling my ass, to start sliding down.  I started fussing........ (truthfully I was just a bundle of nerves)


While I was wiggling and tugging W invited another Dom friend to come and join him.  What a strange experience/sensation!!  W was paddling and the other Dom was hand spanking.  It was quite a mind fuck..... (for lack of a better term).  Then they switched to leather straps and got a decent rhythm going ........... it felt great.


It was a long warm up........ and I had plenty of time to gaze through the rungs of the ladder-like frame at play going on on the other side.  It wasn't really registering.. I saw red rope and what I thought was bondage... and I was just sort of floating along with the leather strapping and letting the red ropes focus my brain. 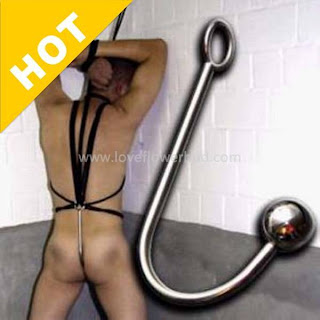 and no I do NOT think it is "hot" (in public) but it was the best picture to illustrate.

Honestly I wanted to run....... I felt like a peeping Tom... Once the action picked up on our end (well actually MY end) I shut my eyes so I didn't have to watch the complete insertion.


It was all very nice - but not all that challenging..... so at one point W leaned in to check on me and I asked if we could step up the pain level just a notch or two.  W pulled out the whips and the other Dom stepped back and let W notch it up three or four :)


i turned my head and focused on some pretty lights sparkling ......... and was thoroughly and totally enjoying the pain.  The Gorean whip came out... god I love that whip!!  and the next thing I knew W was talking to me .. asking me "who loves me??" and I knew the answer but couldn't form the words.........


We moved to a sofa and snuggled together .... I wish I had the words to describe the after feelings........ people seemed to drift in and out of my consciousness... the music was surging ... the lights were twinkling...


And then that Domme of the red ropes had the guy bent over the spanking bench right in front of me....... and she was pulling the anal hook out....... Then ..blink blink.. she had another sub over the bench and she was unlocking some tiny wee little lock.  I was fascinated watching her fingers playing with the key and the lock.... then the sub was wincing and crying out ... W leaned in and was telling me it was a lock butt plug.  Apparently it is small when inserted.. then the base is turned and turned and the plug opens up wider and wider.. then it is locked into place.  Obviously when it is to be removed .. it is unlocked and twisted until it is small enough to pop out........


Honestly all of this - information and visual aides - were like some nasty bad dream ........ I kept thinking 'I don't get the need to do this in public'.


Then W and I were up walking around meeting and greeting......... and the evening passed pleasantly.


After 2 miserable parties with rude spectators and interruptions... we had a successful play session ..... and all is right with the world again.

Tomorrow though I think I will do a little re-visit to the party and describe some of the folks that were there (and there were a LOT) .......