Have you ever felt that you are simply trying to re-invent the wheel??
i have a feeling that is what i have been trying to do these past few weeks.... let me explain........

After all this time i really hadn't ever opened it and explored it...... Sir and i had gone to a book signing .. and an exposition (of sorts) of the types of things one could produce.... i was impressed BUT as we have a fully loaded play room i just didn't see the point to building anything more..........

Then one evening our friend Cloud mentioned he had been trying to understand the directions for a braided flogger..... i tried to make a pattern from a piece of newspaper .. and landed up with dirty grubby hands and not much else to show for my effort......... BUT.. my "creative" side was tweaked. Shortly afterwards as luck would have it.. i purchased a spool of suede lacing. Out came the book and i started working on this braiding project.

Now i CAN braid.. i can even do french braiding....... so i ask you .. how difficult could it be to braid some leather lacings together to form a whip??? Once i got the hang of braiding out a strip every so many inches so that there was a natural tapering.... everything went along swimmingly ... until i looked at the project closely. i was NOT impressed with my braiding. So i unbraided and started all over.... again.. and again.. AND again!!! i tried braiding without any tension.. i tried looping the end over a door knob to help keep the tension.... i tried looping it over my big toe (that one is actually the one that worked best for me).. but still i was never satisfied with the outcome. 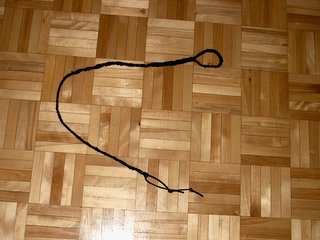 i trimmed off the extra strips ...... and turned to Sir and presented Him with the new whip. Now friends.. you have heard me talk about THE whip.. the leather tawse.. the purple people eater... Miss Christine the cane.. all the evil wicked toys that Sir loves to use.. and i love to hate....... why may i ask did i have to try and re-invent the nasty toys??!!!! Sir on receiving the new whip had to - of course - try it out and see how it worked and how it felt in His hand. After a handful of swings i was dancing an Irish jig and wanting to rub my poor bum..... It turns out that this braiding project of mine..... had produced a toy that not only hurts like the devil..... BUT it also raises welts on my ass!!!!! ughhhhhhhh... will i never learn??!!!!

Note to self: do NOT try to re-invent the wheel ever again !!!