Sooooooo did the blog title catch your eye??? Sex does sell doesn't it??

On Saturday W and I went to the "Everything you want to know about Sex" show in Toronto.   As Toronto (mid town) is a mess of construction and roads dug up we decided to drive to the burbs and take the commuter train into town.  That went well.

When we got to Toronto it is was pretty much lunch time.  We walked out of Union Station to a maze like pathway of barriers and construction.  We had NO idea where there was a place to grab a quick lunch - we couldn't see anything - the barriers were that high!!  and it didn't help that it was raining and folks had umbrellas up blocking the little we could see.

The kinky booth was way at the back of the Convention Hall tucked away in a corner.  We managed to make our way over to them.... to see floggings and bondage/suspension and spankings and fet wear and every piece of dungeon equipment you could imagine.

We also were delighted to find a great group of kinky folk we know.  Sir got to experiment with a couple of nasty nasty toys while I perched myself over a spanking bench.

W and I wandered around for a bit more.. I got my fortune told (and it wasn't the least bit sexy or kinky!!! le sighhhhhhh) and then we decided we had had enough and headed home.

Truthfully when I sit back and think about the day - the best part ... the very best part of the day - was when W and I were busy snapping pictures of the tall buildings (like some country bumpkins) ......... 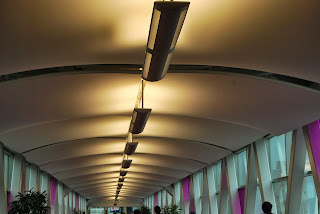 skyway to the Convention Center 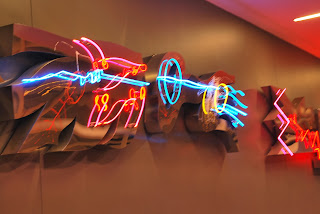 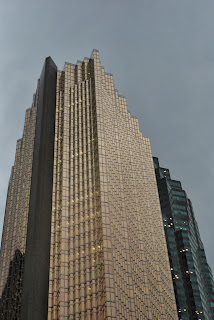 and that was my amazing adventure to the big city to a sex show.
Posted by morningstar 0n October 23, 2013